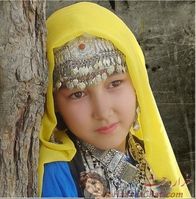 The Hazaras are one of several ethnic
groups inhabiting 7 million mostly in central Afghanistan. The area is
known as Hazarajat or originally Hazaristan. The Hazaras are
Muslim and Shi'a in majority, but we also have Sunni's. We speak our own version
of Farsi known as the "Hazaragi" dialect. The Hazaras are the second
largest ethnic group in Afghanistan. However, as a consequence of the
discriminatory and segregationist policies of ruling Afghan/Pashtun governments,
they remain politically, economically and socially the most underdeveloped group
in Afghanistan society

A third theory
maintains that the Hazaras adopted Shi’ism as soon as they converted to Islam.
After Ghazan-Khan his son, Abu Said, continued his father’s tradition (Rashid,
1959:984-985,997). Thus, according to this theory, Shi’ism was first established
and encouraged in Afghanistan by Ghazan Khan and his son Abu Said.

It
could be argued that the theories of Schurmann and Temirkhanov are both correct,
i.e., it is possible that some Hazaras were converted to Shi’ism by Ghazan Khan
and Abu Sa’id, a fact which need not contradict the theory holding Shah Abbas
responsible for further encouraging Shi’ism amongst the Hazaras. Thus, it can be
maintained that Shi’ism amongst the Hazaras began at the time of Ghazan Khan,
but that it was not until the Safavid period when Shi’ism became the official
religion of Iran that the process was completed. The original Shi’as in Iran and
Afghanistan were the descendants of Ali, known as Sadat-e Alavi. The conversion
of the Hazaras to Shi’ism did not take place at one particular period; it is not
possible to maintain that the Hazaras converted to Shi’ism at one particular
moment in history. Most Hazaras are Shi’as, although some, such as the Sheikh
Ali and Firozkohi Hazaras, have remained Sunni. Shi’ism itself is divided into
smaller sects. One of the most internationally respected and famous scholars, a
founder of the Islamic Renaissance in Afghanistan, Sayyed Jamaluddin Afghani
(1901), referred to the Shi’as Hazaras as ghali. Copyright: Askar Musawi, "The
Hazarahs of Afghanistan".