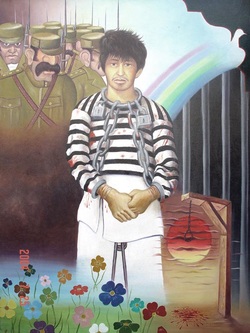 Shayed Abdul Khaliq Hazara
The martyred hero, had fought against tyranny and oppression. His goal was to bring about social justice and equality, especially for his people. He sacrificed his life for such a noble cause. This brave hero and son of the proud Hazara nation had felt the injustice with his very flesh and bone. At a young age, he understood the brutalities and oppressions that had befallen on his country, on his people as well as the non-Hazaras. The top head of the pyramid of this oppressive regime had to be eliminated and so he took the mission upon himself, to sacrifice himself in order to save the whole nation, particularly the hopeless Hazaras. He made a silent promise and was determined to carry out his plans, knowing that there could only be one answer, one conclusion, to such a reign as Nadir Khan’s.
Afghanistan had to be purged of such a cruel and barbaric person as this Nadir Khan, who never tired of sending out his prejudiced and hate-filled decrees and new ways of torturing and killing Hazaras. Abdul Khaliq refused the idea that he was the one born guilty, as was the mentality of most Hazaras because of the laws of Nadir Khan. He knew it was the ruler himself who was not only born guilty but was, in fact, digging his own grave. Khaliq knew that by eliminating the tyrant he would go down in history and be remembered by such a noble cause. No matter how young he died, he knew that his name would at least live eternally. And yes, the people of the world and of the region, especially the Hazaras and non-Hazaras, have realized that indeed, young Abdul Khaliq had taken a noble mission as his own personal duty. This has become even more evident in the past few decades as people realized just how big of a despot Nadir Khan really was. In the beginning, the news and media were all manipulated by Nadir Khan’s family but now that people are less afraid to report and write the truth, the shadow of lies have slowly been pushed aside, revealing the facts and reality. In the last few decades, people have been writing the no-longer censored truth and Abdul Khaliq changed from a “John Wilkes Booth” to a shining star for those who suffered for too long under tyrants, he became to be known as a symbol of freedom, equality, and justice.