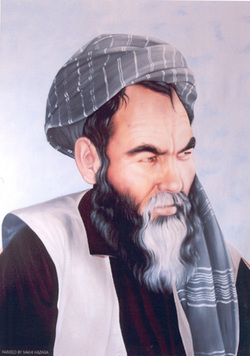 <<Shayed Abdul ali Mazari Hazara Leader>>
The life of the martyred leader, Abdul Ali Mazari, is a clear reflection of the
lives of his people. The exact birth date of the martyred leader, is not clear, but he was born into a poor peasant family in 1325 AH (1946) in Nanvayee, a village in Charkent, Mazar-i Sharif in Balkh province, Afghanistan. He faced poverty in his own life and was aware of it in the lives of his people, and strove indefatigably and with total honesty for its eradication. Simultaneously with the occupation of our country by the Red Army, the martyred leader returned to his birthplace and took leadership of his people's armed jihad. During the first years of the Jihad, he lost his young brother, Mohammed Sultan, in a face to face battle with the occupying army, as well as his sister and several other members of his family. His uncle, Mohammad Jaffar, and his son, Mohammad Afzal, were imprisoned and killed by the puppet regime in Kabul. He also lost his father, Haji Khadadad, and his brother, Haji Mohammad Nabi, in the rebellion and liberation struggle of his nation.
The martyred leader was the promoter of human rights and Islamic brotherhood for all our country's peoples, and insisted that "the demand for rights is a call for brotherhood amongst the different peoples, not for enmity." He would proclaim in certainty: "we have never had anything in Afghanistan and do not want any advantages now. We simply want to crush the monster of monopoly." In the pursuit of national unity, the martyred leader initiated the valuable Supreme Coordination Council, where for the first time, the practice of brotherhood and equality amongst all our country's peoples was successfully put to the test.
Following fascism's barbaric reprisals at the end of Dalv (February), the martyred leader and the heroic people of West undertook a legendary and brave defensive which lasted until Saturday, 21 Hoot (11 March 1995), and immortalized the legend of resistance with their defense against its last three-day assault.
However, when the Taliban - these false bearers of peace - suggested mediating to end the fighting, the Islamic Wahdat Party leadership welcomed Taliban with honesty and trusting belief in the Taliban's aims, and placed them in some if its front-line positions. Unfortunately, in view of outside provocation and the Taliban's lack of familiarity with the social strains on our people and country, in particular the people of West Kabul, they forcefully disarmed the Islamic Wahdat Party's brave fighters and evacuated them from their positions, ignoring the concerns of the Islamic Wahdat Party's leader over the Taliban's inability to defend these positions in West Kabul. Even so, our martyred leader, Mazari, in view of his own sincere desire to end the Taliban's insistence, and handed over the party's positions to them. Alas, following the fascists' first assault, the Taliban abandoned their positions and the people of West Kabul to their fate at the hands of the bloodthirsty adversary without defense.